“Squier offers a delightful, provocative, and unexpected look into the visible, and often hidden, interrelationships that bind human and fowl.”
—Gregg Mittman, author of Reel Nature: America’s Romance with Wildlife on Film
“This vividly written transdisciplinary book is full of proof that chickens are good to think with, good to live with, good to inhabit thick histories with. Squier’s “partial alphabet” invites human beings and chickens to reintroduce themselves in practices of love and care in art, science, domesticity, farming, and more.”
—Donna J. Haraway, author of When Species Meet (University of Minnesota Press, 2008)
Poultry Science, Chicken Culture is a collection of engrossing, witty, and thought-provoking essays about the chicken—the familiar domestic bird that has played an intimate part in our cultural, scientific, social, economic, legal, and medical practices and concerns since ancient Egypt, Greece, and Rome. Organized as a primer, the book reaches beyond narrow disciplines to discover why individuals are so fascinated with the humble, funny, overlooked, and omnipresent chicken.
Spanning fascinating and diverse fields, Susan Merrill Squier assesses the chicken as the focus of film, photography, and visual art in many media; details some of the roles played by chickens and eggs in the development of embryology, biology, and regenerative medicine; traces the iconic figure of the chicken (and the chicken thief) in political discourse during the 2008 presidential election; demonstrates the types of knowledge that have been lost as food production moved from small-scale farming to industrial agriculture; investigates the connection between women and chickens; analyzes the fears and risks behind the panic around avian flu; and scrutinizes the role of chicken farming in international development. A combination of personal passion and surprising scholarly information, Poultry Science, Chicken Culture will change forever the way you think about chickens.  Rutgers University Press, 2011. Featured Book Panel book at the 2011 Society for Literature, Science and the Arts (SLSA) Conference.  Awarded the Michelle Kendrick Memorial Book Prize for the best academic book on literature, science, and the arts published by a member of the SLSA (Society for Literature, Science and the Arts) in September 2011. 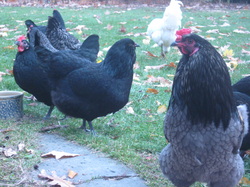 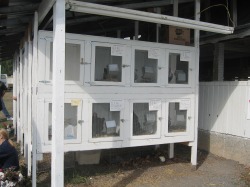 For the last seven or so years I have been keeping chickens, initially ones from my sister's farm, then chickens from the Amish/Mennonite poultry auction down in Big Valley and from the poultry science research center at my university, and finally birds I ordered online from a poultry hatchery, Murray McMurray. Chickens are fascinating creatures, but even more absorbing is what they teach about forgotten knowledges: relearning skills for 'reading' a chicken's conformation and behavior (still taught to rural girls and boys where I live, so they can exhibit their chickens at the Grange Fair in cages such as the one to the left, for expert judging), recovering alternative ways of thinking about farming and our whole food system,  discovering that dead metaphors and 'old wives tales' have real practices behind them, returning to classic children's stories to uncover fresh meanings, as well as assessing the many new ways we are imagining, transforming, even re-engineering chickens to respond to our own fantasies, wishes and desires.  Neither a nostalgia trip nor a celebration of progress, my encounter with chickens continues to be more like a meditation on interconnectedness or what Buddhists call "dependent origination." 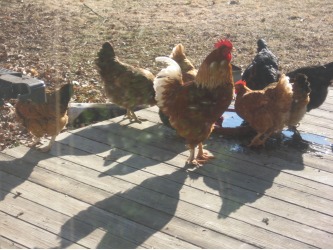 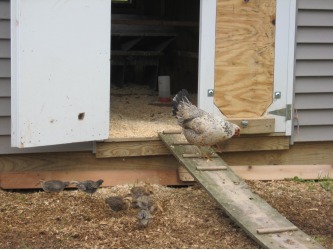 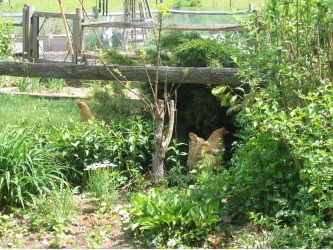 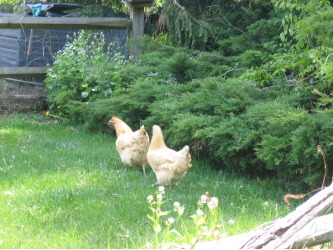 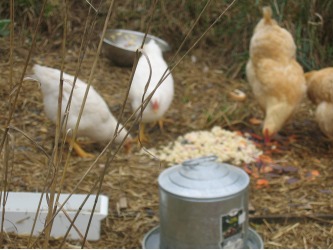 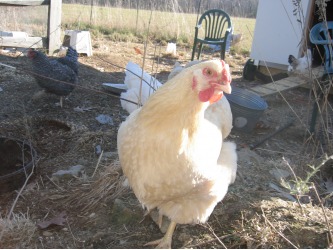 Snow is a brutal thing in the chickenyard.  Then hens and roosters pause coming out of the hen house, stunned by the cold and the white. I stop my water-carrying and feed-scooping to marvel at the way the birds' multi-colored feathers stand out against the white background.  But to the hawk, circling above or perching in the large pine tree, the snow is a boon for the very same reasons.  Today I lost all but one of the beautiful Sebright hens, below, to a large Red Tailed Hawk who grabbed them up from the snow, and then ate them at leisure.  I found one of the roosters dead at the base of the pine tree, his stomach hollowed out, his scrawny neck denuded of feathers: I'd interrupted the hawk as it perched on him, ready for another meal.  Life in the chickenyard on January 9, 2010. 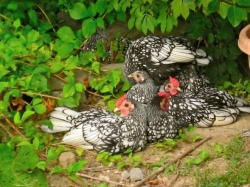 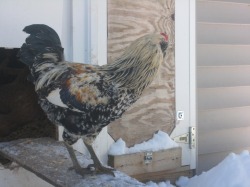 His name only came to him when I took his body in for a necropsy by the diagnostic avian vet.  I'd gone out to the hen house this morning with  a bucket of water and a bowl of food scraps from our last night's dinner.  I was smiling, thinking about how the chickens would tear into those old crusty noodles, one of their favorite foods.  But when I opened the door I found my Salmon Faverolle rooster dead on the shavings-covered floor.  He was on his side, his head almost covered by his side-whisker like neck feathers,  and his two legs tucked up to his belly as if he'd been in pain, or sleeping.   The vet will do a necropsy of the chicken whom I named Good Boy only as I checked his body in to the diagnostic lab, because they required a name or a number for "accession."  I don't need to number my chickens, because they're backyard birds, and I don't name them probably for the same reason.  They're not pets--they are chickens, with their own world, society, set of practices: dignified but not sentimentalized.  That is, I guess, until they die. So tonight I mourn the only rooster I ever had who never attacked me, and who while not a great hawk watchdog, was also kind to the hens.
Google Analytics, Blogger,